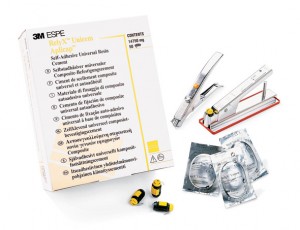 3M ESPE RelyX Unicem Self-Adhesive Universal Resin Cement is an encapsulated, dual-cured resin cement. It is selfadhesive, requiring no tooth surface preparation such as etching or priming. The cement is filled 72% by weight and contains fluoride. RelyX Unicem is available in two capsule sizes (Aplicap and Maxicap) in shades A1, A2, A3-opaque, white opaque, and translucent. It is indicated for the cementation of metal, PFM, ceramic and laboratory composite crowns, bridges, inlays, onlays, and metal or fiber posts. It is not recommended for the cementation of veneers. Working time is two minutes for the Aplicaps and 2.5 minutes for the larger Maxicaps. The Aplicaps have enough material to cement one to two restorations, whereas the Maxicaps have enough material for three to five restorations. This product received a 98% clinical rating.

Debonding
A low debonding rate was documented over the four-year evaluation period. In over 4,400 restorations cemented with RelyX Unicem, 32 (0.7%) required re-cementation (Figure 2). These included 18 ceramic onlays, nine ceramic crowns, and five PFM crowns. Of the 18 ceramic onlays that debonded, 10 had little direct retention. In four of these debonding cases, a portion of the tooth fractured. 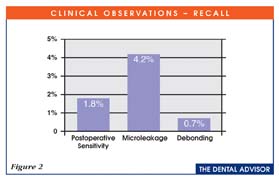 RelyX Unicem has proven to be an excellent and reliable self-adhesive resin cement in the four years since its introduction.