The COMFORTdrive® 200XDR is a lightweight, high-speed electric handpiece featuring patented micro-motor technology. It is designed for precision cutting and quieter operation with superior ergonomics. COMFORTdrive has a no-bur-stall feature to improve efficiency in gross reductions and crown and bridge preparations. The handpiece features an integrated sterilizable motor that delivers 30 watts of constant power for consistent performance. The integrated motor reduces the distal area length after the pivot point in the doctor’s hand allowing for comfort and control. The COMFORTdrive operates at 55 dB. The COMFORTdrive system features Plug-n-Prep auto-calibration technology for easy setup that does not require adjustment to any other equipment in the office. Once calibrated, the COMFORTdrive system allows for an air-like feathering effect between 30,000-200,000 rpm with the foot pedal. The system is designed so that doctors using air-driven handpieces can seamlessly transition to COMFORTdrive with no learning curve. According to the manufacturer, the COMFORTdrive is 40% lighter and 15% shorter than traditional electric handpieces, has 30 watts of constant power, has quiet operation at 55dB, and has 50% more feathering capability ranging from 30k to 200k rpm. The system contains: one COMFORTdrive 200XDR handpiece (with integrated Micro-motor), and one COMFORTtronic 4894 Control Module, tubing with COMFORTbase coupling, power supply unit with power cord, spray nozzle, lamp changer, operator’s manual, laminated quick start guide, and product literature. COMFORTdrive was evaluated by nine consultants in 428 uses. It received a 98% rating.

Consultants unanimously reported that COMFORTdrive was lightweight. With the power of an electric handpiece and the size and feel of an air-driven handpiece, COMFORTdrive provides the dentist with an ideal cutting instrument. Operation is extremely smooth, and all users rated it as the quietest handpiece they had ever used. The auto chuck worked flawlessly, holding the bur without slipping. The light is bright, and quality of air/water spray is excellent. COMFORTdrive is only available with a full-size head since smaller heads can generate greater heat and noise. Fifty-six percent of consultants reported that COMFORTdrive was better than their current handpiece, whereas 44% reported it was equivalent. Seventy-eight percent would switch to COMFORTdriveand 100% would recommend it. 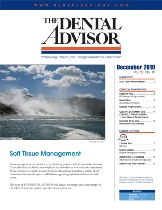