3M ESPE Z100 Restorative is an all-purpose, light-cured composite with zirconia filler particles averaging 0.6 μm in size. Editors of THE DENTAL ADVISOR placed over 1000 restorations beginning in early 1992. Many of these restorations have been monitored and recalled periodically with the findings published in THE DENTAL ADVISOR.

Figure 1 summarizes the ratings that the 129 restorations received in the categories evaluated: resistance to fracture, esthetics, resistance to marginal discoloration, and wear resistance. 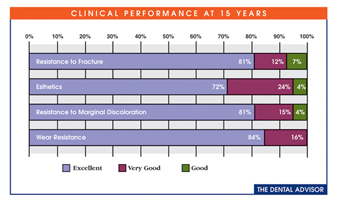 Resistance to Fracture
One hundred five of 129 restorations exhibited no fracture or chipping (81%). The remaining 19% showed some minor chipping. None of these restorations required replacement.

Esthetics and Resistance to Marginal Discoloration
Very little shade change took place over the 15-year period. Seventy-two percent of the recalled restorations exhibited excellent shade match. About 28% showed slight discoloration, some of which could be due to water sorption. Marginal discoloration is likely related to the bond of the composite to the tooth. In most cases, the composite was bonded with a 4th-generation bonding agent. Some of the discoloration at the margins was due to chipping and it was most visible in patients who smoked. Eighty-one percent of the restorations had no discoloration at the margin.

Wear Resistance
The wear resistance at 15 years was excellent. In most cases, wear was almost undetectable, either with an explorer or an intraoral camera. The low wear rate of Z100 is consistent with the normal amount of wear observed on tooth enamel and amalgam restorations. None of the restorations were replaced because of excessive wear. In fact, in 84% of the restorations, the wear was undetectable visually.

3M ESPE Z100 Restorative performed exceptionally well over the 15-year monitoring period in both the anterior and posterior regions. The restorations had long-lasting esthetics, minimal wear and negligible fracture or chipping. This composite received a 96% clinical rating.

Patient satisfaction was very high. In fact, none of the Editors of THE DENTAL ADVISOR would have predicted such a positive outcome of Z100 restorations 15 years after placement. The clinical performance of Z100 during this period met or exceeded all expectations. Even though many new composites have since been introduced, Z100 has proven itself to be in a class of its own.