3M ESPE Filtek Supreme Plus is a universal composite indicated for all anterior and posterior direct restorations. It is available in seven dentin shades, 17 body shades, eight enamel shades and four translucent shades. The shades may be layered or used alone. All shades, except for the translucent shades, are radiopaque. Curing time for 2 mm increments is 20 seconds for enamel, body and translucent shades and 40 seconds for dentin shades. 3M ESPE Filtek Supreme Plus is available in 4 g syringes and 0.2 g unit-dose capsules.

Resistance to Fracture/Chipping
The fracture rate of 3M ESPE Filtek Supreme Plus at 10 years was less than 7%. Over 93% of restorations recalled showed no chips or fractures (Figure 1). Slight chipping occurred on 4% of the restorations, requiring no treatment or minor refinishing. Three percent fractured and required repair or replacement.

Esthetics
3M ESPE Filtek Supreme Plus shades blend well with surrounding enamel, earning excellent ratings for esthetics in 81% of recalled restorations (Figure 1). Surface texture was smooth – in many cases smoother than at the time of initial placement. Some of the 10-year old restorations (3% overall) lacked shade stability and were noted to be yellow or opaque.

Resistance to Marginal Discoloration
Ninety percent of restorations had no visible marginal staining (Figure 1). The majority of staining observed was light brown or gray stain along the margins and was considered to be mild and may also be result of the adhesive step. Eleven restorations (less than one percent) had to be replaced due to marginal discoloration. All of the restorations receiving ratings of 1 or 2 in this category were also associated with open margins or recurrent caries.

Wear Resistance
3M ESPE Filtek Supreme Plus exhibited very good wear resistance (Figure 1). Ninety-four percent of restorations received ratings of excellent, as they exhibited no visible signs of wear. Wear resistance has been consistent through each year of this 10-year evaluation. 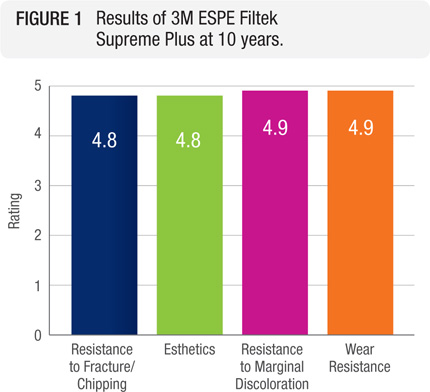 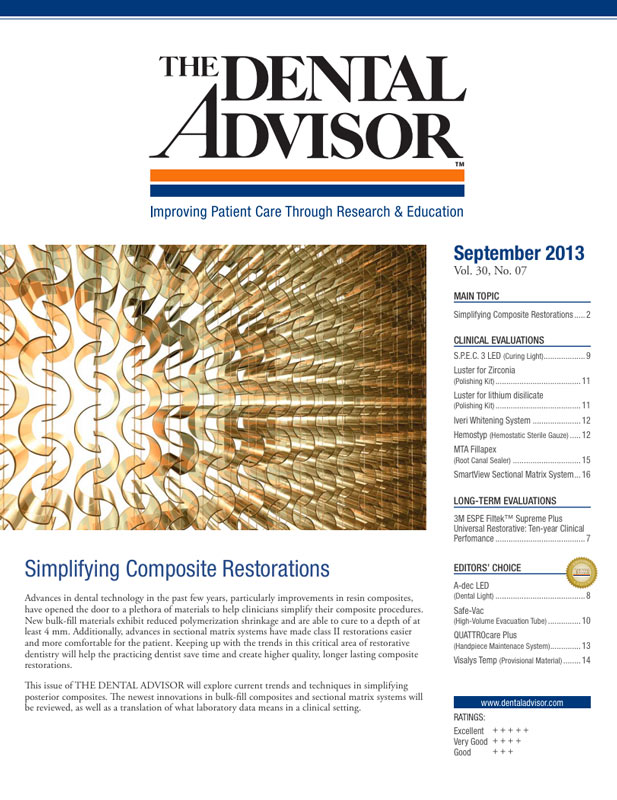