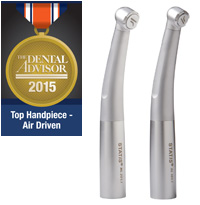 STATIS is a line of air-driven handpieces available in two head sizes. These high-speed handpieces have a 25,000 LUX illumination, an innovative spray system, and a push-button chuck mechanism. They can be sterilized to 135°C. The short head sizes enhance access in the oral cavity. These handpieces include a technologically advanced cage material, which houses the ceramic bearings, lowering friction and extending bearing longevity. STATIS utilizes the MULTIflex-style Connex quick connect system to provide greater compatibility by fitting most modern treatment units. STATIS handpieces are designed to have better handling and quiet operation with increased lateral cutting torque. The STATIS ML has four jets for optimum cooling of the bur and tooth, and the smaller STATIS SL comes with a slotted nozzle to cool the entire treatment region with a fan-shaped spray. STATIS handpieces are backed by SciCan’s 48-hour quick repair service and a two-year warranty. STATIS handpieces were evaluated by seven consultants in daily use during a three-month period. STATIS handpieces received a 96% rating.

Consultants rated balance and ergonomics as very good. The handpiece had a good feel in the operators’ hands. A light texture on the smooth surface allows the dentist to maintain a positive grip, even with wet gloves.

STATIS handpieces are lightweight and run smoothly and quietly with very good torque. Routine procedures, including crown preparation were performed efficiently without the handpieces slowing or stalling. Consultants rated quietness as excellent.

Connection to the coupler is a quick snap-on/pull-off. The push-button chuck is easy to press, and the chuck holds the bur tightly for concentric operation.

Consultants rated the accessibility and visibility of the head as very good. In cases of difficult access, the smaller head of the STATIS SL was a great option.

The four ports provide water and air that has sufficient force to cool the bur and clear debris from the working area. STATIS SL (small head) has only a single, slot-shaped port. This port provides moderate output, and some consultants reported inconsistency in the water spray; the spray would decrease during use.

Illumination is bright and well focused and did not degrade during the three-month evaluation period.

Consultants rated ease of cleaning and sterilization as excellent. Most consultants used an automatic maintenance machine in which the handpiece snapped onto a coupler for lubricating/purging. The smooth surface of the handpiece wipes clean with no grooves to trap debris.

No malfunctions of the handpieces were noted during the three-month evaluation period. Consultants appreciated the three-year warranty. If a repair were necessary, the mailing pouch was included in the box, along with the 48-hour turnaround of the repaired handpiece. This service was viewed as outstanding.

The STATIS ML is the handpiece of choice for crown preparation, as it produces high torque with FOUR-port water spray. Other than some inconsistency in the water spray, the handpieces performed flawlessly during the evaluation. Fifty percent of consultants reported that STATIS handpieces were better than their current handpiece. Seventy-five percent would switch to STATIS handpieces and 100% would recommend them. 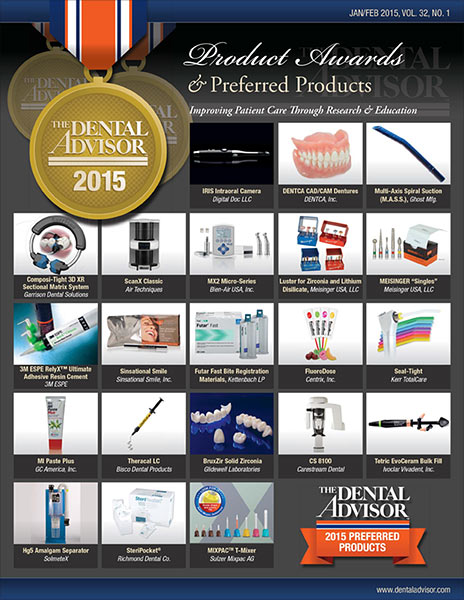