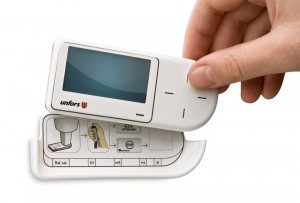 Unfors RaySafe is a safety instrument for monitoring of radiation from intraoral x-ray machines in dental operatories. Use of the meter involves initial calibration to the x-ray machine followed by a single exposure. Daily monitoring is a suggested routine, but the practice may monitor weekly or monthly unless there are conflicting regulations. The LCD display on the unit shows if the radiation output is correct (OK), off by small percentage (ATTENTION), or if the machine requires service (STOP). Ongoing monitoring of x-ray machine radiation output  may eliminate under- or over-exposed images; thus the potential for retakes and patient exposure is reduced. Unfors RaySafe is designed to be easy to read and convenient to integrate into the daily routine of the dental office. Unfors RaySafe was evaluated by 11 Editors over a period of three months. This product received an 84% clinical rating.

Instructions
The instructions were rated good. Some consultants thought the instructions should be more explicit regarding how close to set the cone to the meter – it needs to be almost touching it. The literature could provide a better description to show the clinician the value of adding this unit to the office.

Design
The small and compact design was rated very good. The gloss white finish has a clean, modern appearance that is appropriate for mounting on the wall of the operatory.

Ease of Use
Unfors RaySafe is simple to use by positioning the cone over the meter. Occasionally consultants received error messages on the display if the cone was not positioned close enough to the meter, i.e., almost touching it. An error message is the result of improper positioning. The meter measures dose, which changes with distance. The display is large and easy to read.

Ease of Integration into Daily Office Routine
Checking the status of the x-ray machine output was easily integrated into daily office routine. Using the device daily took an extra minute in each operatory. The most time-consuming step was setting each x-ray machine to the exact setting at which it was calibrated before exposure.

Accuracy
The accuracy was rated good. The unit reports pass or fail status but does not give information on the reason for failures.

Effectiveness – Increased Safety
Before availability of Unfors RaySafe, some Editors used the quality of radiographic images as the basis for determining the proper output of their machines. Having a meter to measure the output gives reassurance that the equipment is working properly between annual inspections. Thirty-six percent of consultants thought that Unfors RaySafe increased patient safety.

Patient Perception
Patient perception of safety was rated good. Consultants reported that patients assume that the x-ray unit is safe and they expect that necessary testing is done.

A bold statement will be added to the instructions with an explanation of why the cone must be placed on the meter. Unfors is preparing materials for the waiting room to increase patient awareness.