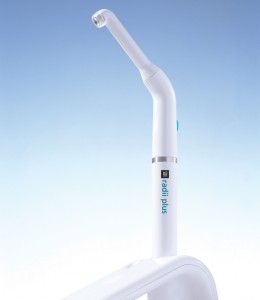 radii plus is a portable, rechargeable LED curing light. It emits light in the 440-480 nm range, polymerizing materials utilizing a camphorquinone initiator. The unit features a single on/off button for light activation. It also includes a 360° swivel head for access to all areas of the mouth. The radii plus unit includes the handpiece (battery pack, control section and standard LED attachment), charger, plug pack, 100 barrier sleeves, three lens caps, and a five-pack of orange light shields. Orthodontic and single-tooth beaching tips are available separately. radii plus features “ramp” and standard modes. The ramp mode begins at reduced intensity for the first five seconds before moving to 100% intensity. This function is designed to reduce polymerization shrinkage. During operation, a beep occurs after the first 15 seconds in ramp mode and after 10 seconds in standard mode. Beeps continue every 10 seconds after the initial beep for up to five beeps (65/60 seconds). radii plus is powered by a rechargeable lithium ion battery. A built in radiometer provides the ability to test the functionality of the unit from the charger base. Twelve consultants evaluated radii plus during a three-month period. This product received a 93% clinical rating.

radii plus is easy to use, quiet, lightweight, and portable. It received excellent ratings for its sleek, thin design, and swivel head. The swivel head is an improvement over the original radii, increasing the usefulness of the unit. The handpiece is stable in the cradle for storage and recharging between uses. Consultants liked the narrow orange light shield at the tip, stating that it was effective without interfering with access or visibility. Although the audible timing signal was rated very good, some consultants wanted variability in the audible sounds to differentiate between ramp and standard modes. Ninety percent of consultants rated radii plus equivalent to or better than their current LED light.  Seventy-two percent of consultants said they would switch to the radii plus, and 90% would recommend it to a colleague.

radii plus (SDI North America) is a cordless, rechargeable LED light-curing unit that received a 93% clinical rating in a review by THE DENTAL ADVISOR in Vol. 23, No. 3, April 2006. radii plus is now more versatile with attachments for curing, bleaching and transillumination. Attachments for curing include the standard Contra Angle, optional Right Angle, and 1 mm and 2 mm autoclavable tacking tips. There is also an Ortho LED attachment that runs for 5 minutes. Attachments for bleaching include both Single Tooth and Full Arch. The radii plus Diagnostic LED attachment emits white light to allow transillumination of tooth structure and an adapter tip that replaces the lens cap is available to create a fine beam of light to illuminate sites where access is difficult. radii plus has a five-year warranty.