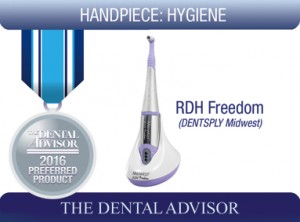 The MIDWEST RDH Freedom Cordless Prophy System includes a cordless hygiene handpiece, charging base and a wireless foot pedal. The handpiece is compatible exclusively with NUPRO Freedom® Disposable Prophy Angles. The handpiece with metal sheath weighs 120 g and has a maximum cup speed of 3000 rpm with a maximum torque of 10 Ncm. It is designed to provide clinicians with easy access and comfort during prophylaxis procedures by eliminating cord drag. The inner motor module is lube-free. Both the handpiece and foot pedal require an initial charge of at least 90 minutes and provides battery life for a full day. The degree of charge is indicated with lights on the inner module and if necessary, the module can be charged for a single use in 15 minutes. The handpiece powers up when it detects motion and shut downs after a minute if not in use. The MIDWEST RDH Freedom handpiece aluminum outer sheath is autoclavable, and three sheaths with color rings are included in the Premium System package. The charger cord has two connections for simultaneous charging of both the handpiece and foot pedal. MIDWEST RDH Freedom Cordless Prophy System was evaluated by 18 consultants in 527 uses. This cordless hygiene handpiece earned a 96% clinical rating.

Instructions
MIDWEST RDH Freedom is easy to set up and use. Instructions for synchronization of the handpiece to the foot pedal are well written with excellent photos.

Charging
Initial charging of the handpiece and foot pedal takes about 90 minutes and must be done before synchronizing them. The power cable connects to both devices at the same time for simultaneous charging. Colored lights on the handpiece indicate when recharging is necessary.

Foot Pedal
The pressure on the foot pedal can be varied to control the rotation speed of the angle throughout procedures. The handpiece continues to run for a couple of seconds after the foot pedal is released.

The portability of MIDWEST RDH Freedom Cordless Prophy System was one of the most highly rated features. The ability to complete prophylaxis procedures in rooms not equipped with a hygiene handpiece was important to consultants.

Three types of latex-free prophy angles are available: firm cup, soft cup and brush. All are sold in boxes of 100. Most consultants would have liked the ability to use a universal prophy angle with the MIDWEST RDH Freedom, rather than having to use a specific design. Some instances of splatter were noted.

MIDWEST RDH Freedom is a very quiet handpiece, which was appreciated by both operators and patients. The speed and torque are sufficient for most prophy procedures, but are lower than some corded handpieces. The low torque was noted by many hygienists. A handpiece cradle is supplied and is intended to be placed on the tray as a place to rest the handpiece when not in use during the procedure. Its main purpose is to prevent the handpiece from rolling and falling off the tray. Hygienists would have preferred a flat side to the handpiece instead of a separate cradle.

The light weight of MIDWEST RDH Freedom, along with the wide diameter of the handpiece reduced hand fatigue, according to consultants. The lack of a cord allowed the user to approach the tooth from any angle without the need for swiveling parts.