Consultants observed that the Great White H Series carbide burs fit well in the handpiece and had good concentricity. On first use, the burs cut through metal very well. The burs can be sterilized, but most consultants reported that cutting efficiency decreased somewhat after sterilization. Most burs were worn out after use on a single case. The smaller diameter burs produced less chatter than the larger size. Clogging resistance was good. Fifty-five percent of consultants reported that Great White H Series carbide burs were better than their current carbide burs and 31% reported they were equivalent. Sixty-two percent would switch and 79% would recommend the product. 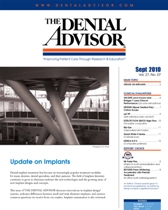