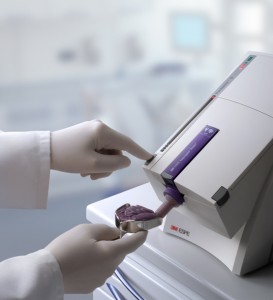 With the new, smaller design of the Pentamix 3 unit, much less counter space is needed compared to the previous models. No consultants utilized the wall mount option. The increased speed was easily noticeable compared to previous Pentamix machines. Quicker dispensing resulted in more usable working time, which is especially valuable with fast-setting materials and full-arch impressions. Consultants noted that the material was dispensed quickly with no voids found in the material. In this evaluation, most consultants used Imprint 3 for the impression material; other materials used were Impregum and Aquasil. Pentamix 3 unit performed flawlessly with all of the different impression materials used. Ninety-two percent of the consultants found the Pentamix 3 unit to be better than their current mixing unit, while 84% of consultants said they would switch to the Pentamix 3 Automatic Mixing Unit unit.

Winner of the 2009 Assistants’ Choice Award